Installing the Gardner was a big job. We were out at Ashby's for 10 weeks. Arethusa's engine room has always been an unopened box - rusty steel fuel tanks and decades of oil and fuel leaks had made a pretty good mess. It took days just to disconnect everything, working through dozens of frozen bolts down there in dark and akward places.

We emptied the old tanks to 44 gallon drums on deck and cut a hole in the wheelhouse roof just big enough for everything to escape. Jeremy from Kerikeri Crane Hire came and expertly lifted out the three steel fuel tanks and the old Ford. Great to see the back of them. 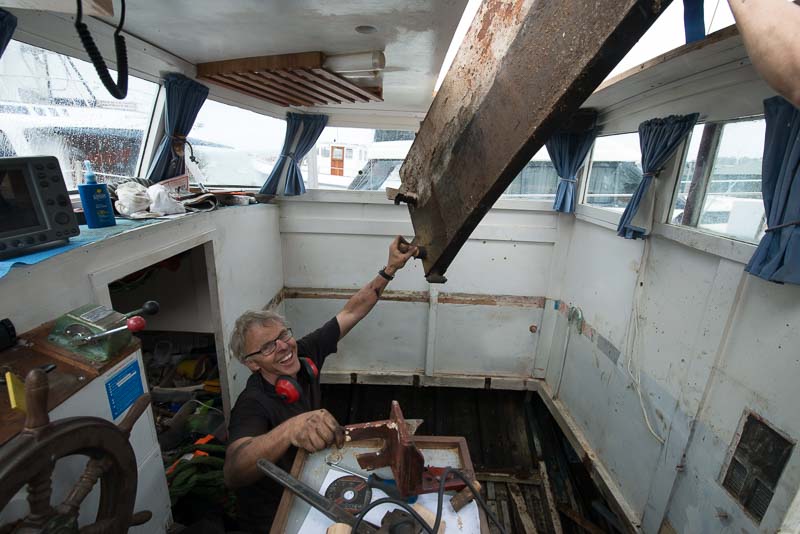 We were left with a big open filthy pit to attack. Got down to scraping, degreasing, waterblasting and vacuuming, buckets and buckets of muck and rusty metal came out of there.  With the engine gone, we were able to remove the old beds by hand, they weren't bolted down at all. Holy Dooly. 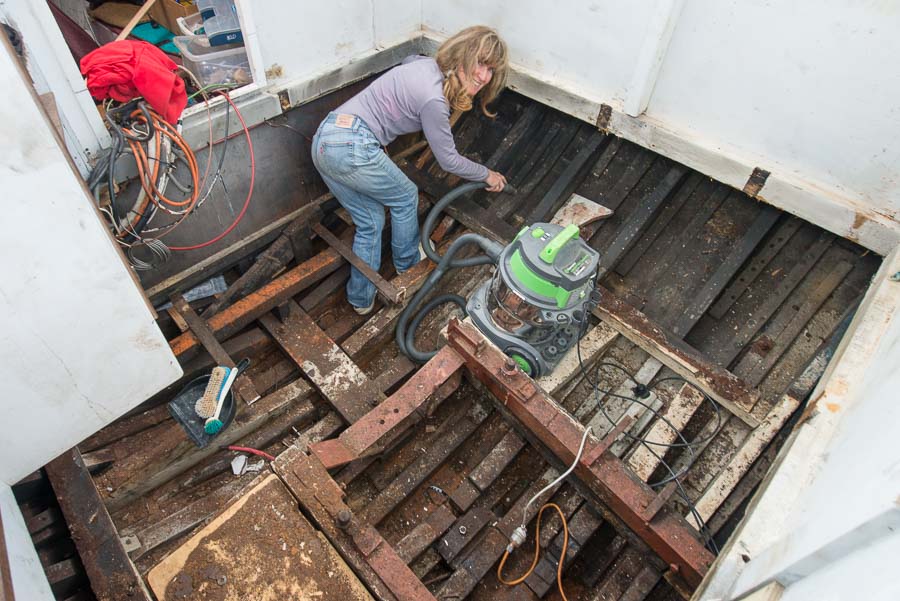 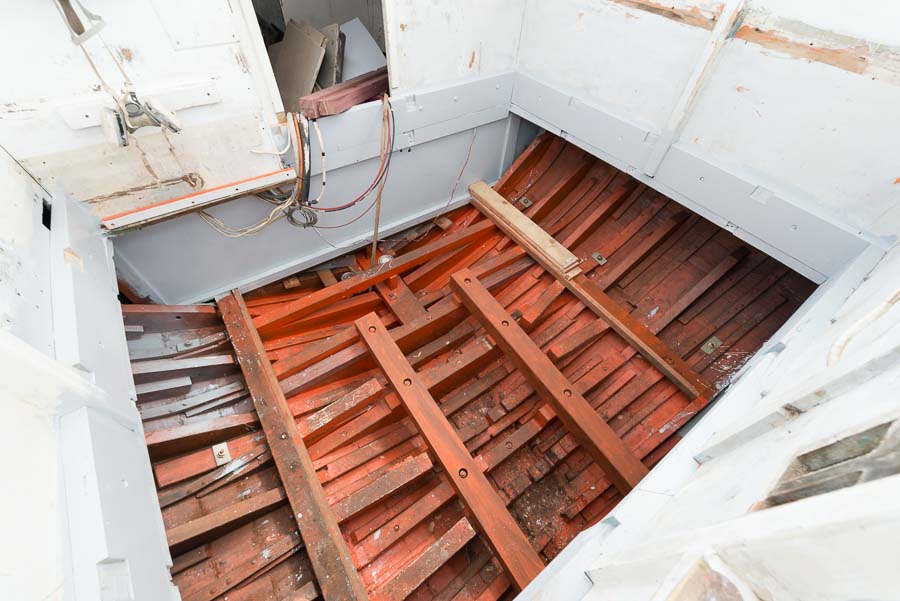 We fitted six new floor timbers made from 300 x 75mm Purple Heart. Each of these was shaped precisely to fit the hull and then copper bolted down through the keel on the centre line and then bolts were driven from the outside of the hull through the ends of each floor timber. We did this to provide a good base for the new engine beds and to strengthen the hull as most of Arethusa's old floor timbers had been weakened by being cut down the middle for some reason. 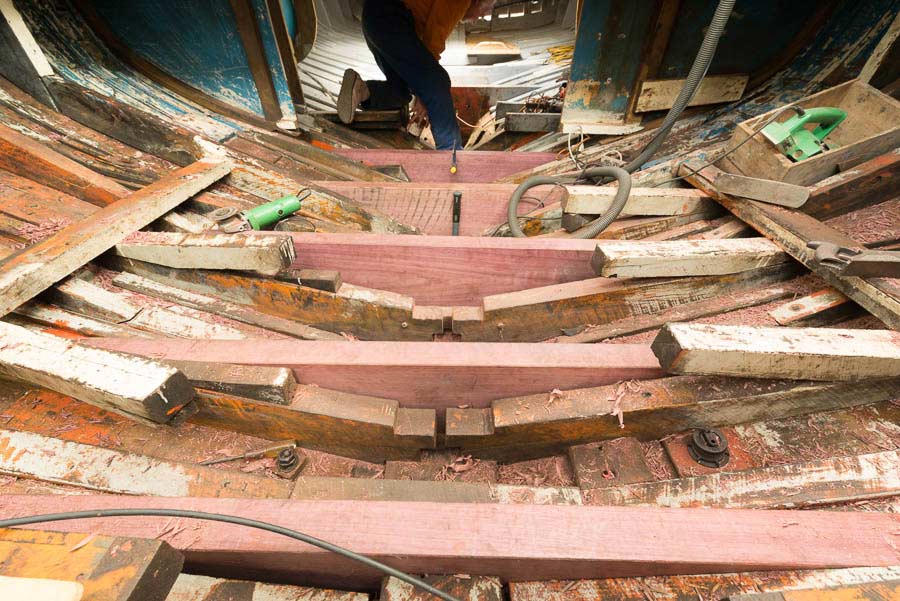 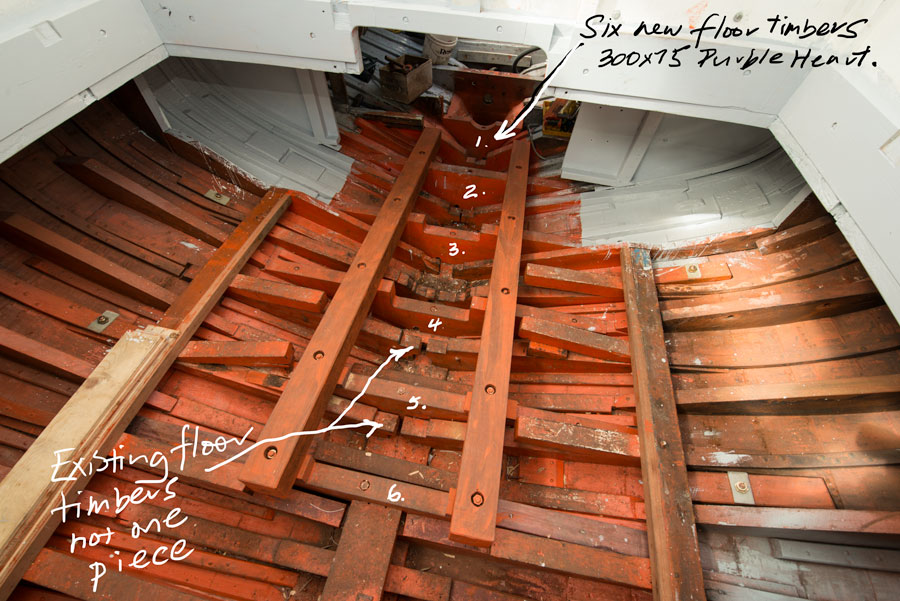 The new engine beds are 125mm sq Wallaba from BBS Timbers. These were copper bolted down through the floor timbers and fastened on the outside of the hull with limpets we had cast in bronze. Each limpet was drilled and tapped on the corresponding hull angle. 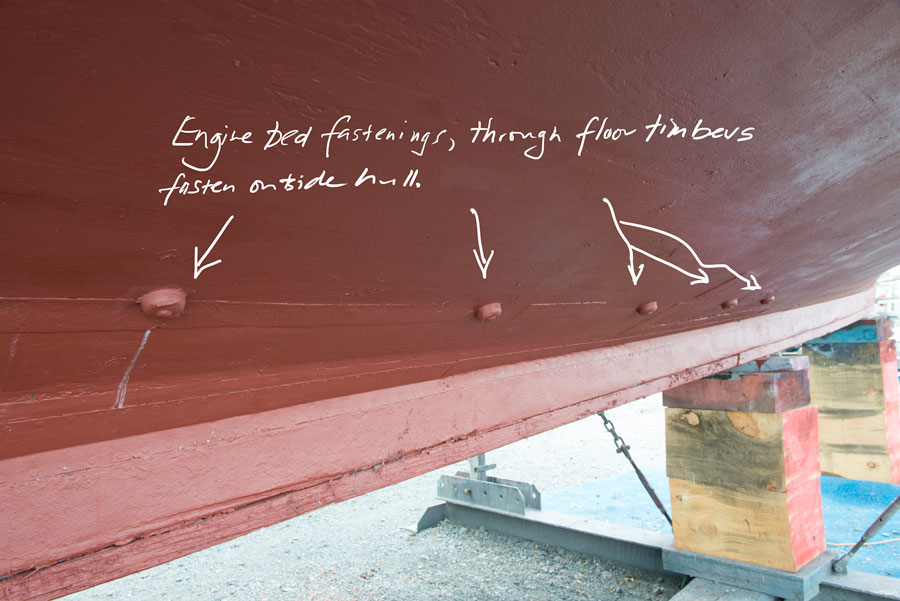 Arethusa has two bilge keels each about eight feet long. These had been put on with galv bolts so while the tanks were out and we had access to their fastenings we removed and inspected them and replaced the galv bolts with copper. 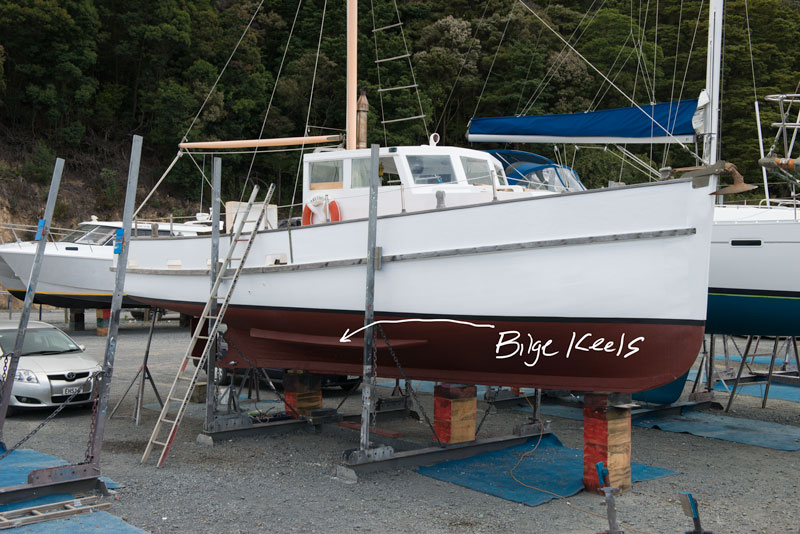 Once the woodwork was completed the bilge got many coats of thin red lead. We got two 500 litre plastic diesel tanks made to shape by Hercules Tanks in Katikati. Beautiful tanks, these were installed and secured. Being see-through, you can check the diesel level and they reflect light, things were definitely looking up in the engine room. 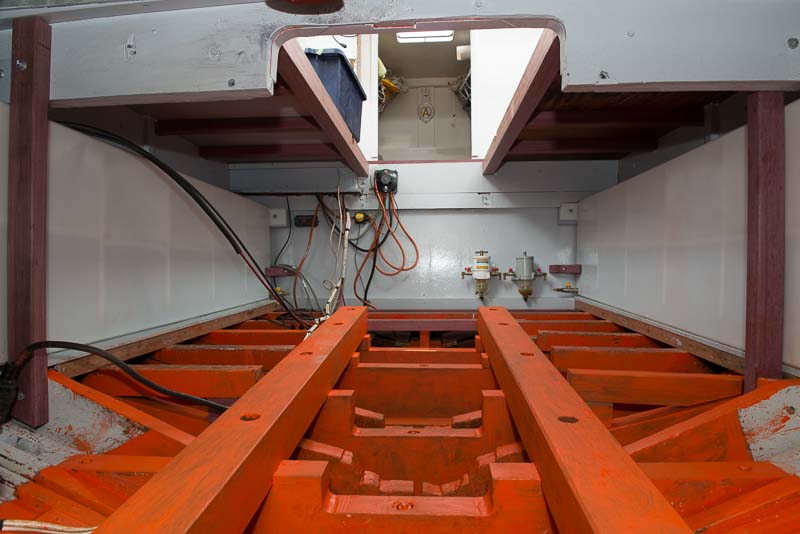 Jeremy and his crane came back and we lifted the Gardner into place - a big day at the races ;) It snuck through the wheelhouse roof with mm's to spare. 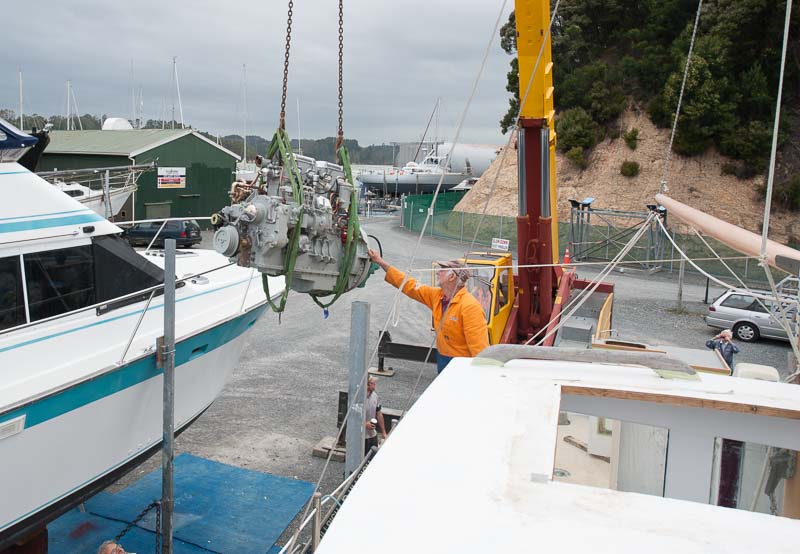 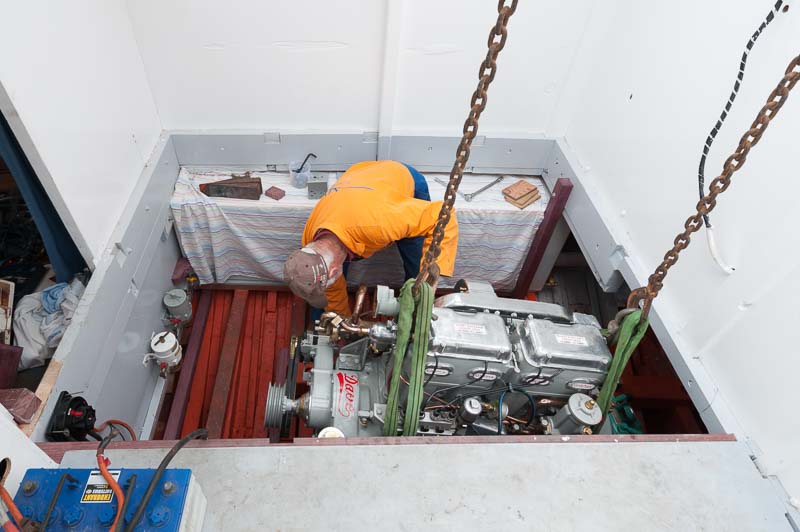 Total Marine made up a new shaft and coupling and also took care of the the new exhaust connections. We rewired the 24volt system getting rid of lots of old stuff that went nowhere. Nice to get that sorted. 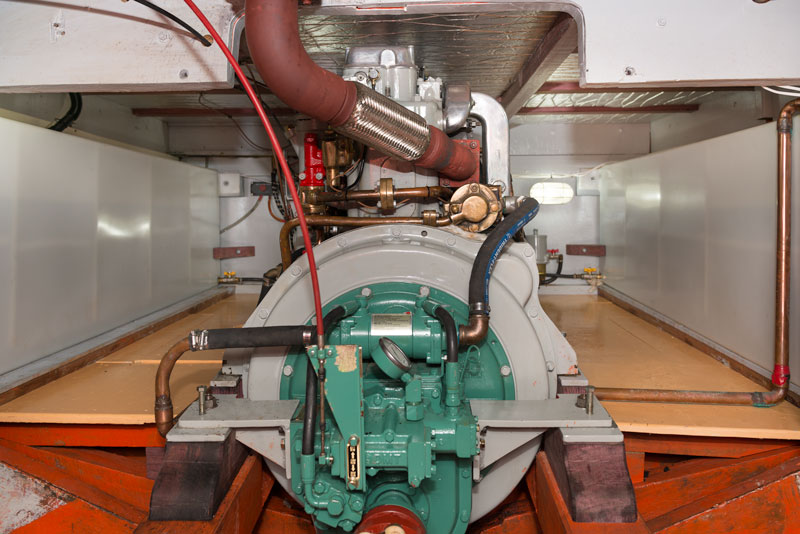 An improvement on this :) 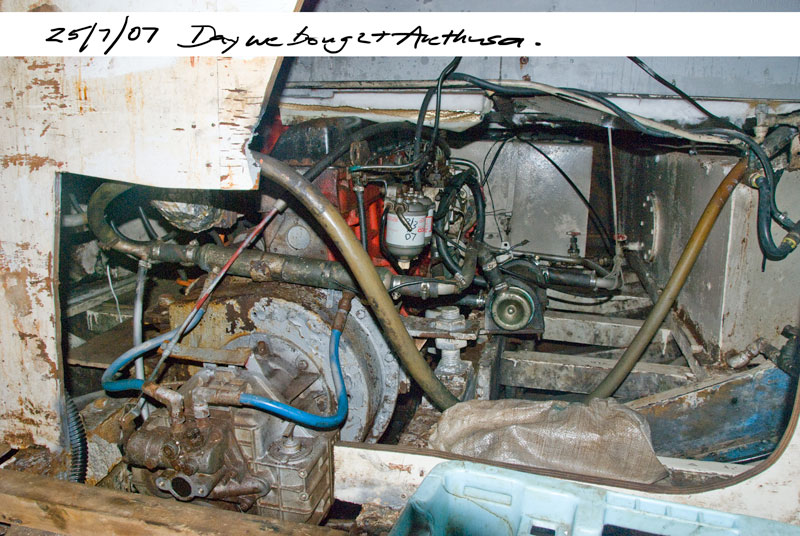 This is a photo of John Gander, shipwright extrordinaire. In his 70's, John has the energy of a 30 year old. When I say we did this, I mean John did it and I helped. John served his time with Carey's in Picton where Gardner installations were the order of the day. I wouldn't have been able to own Arethusa without you John, and I'm so grateful for all the help you've given me, as you say: all for the love of wooden boats. 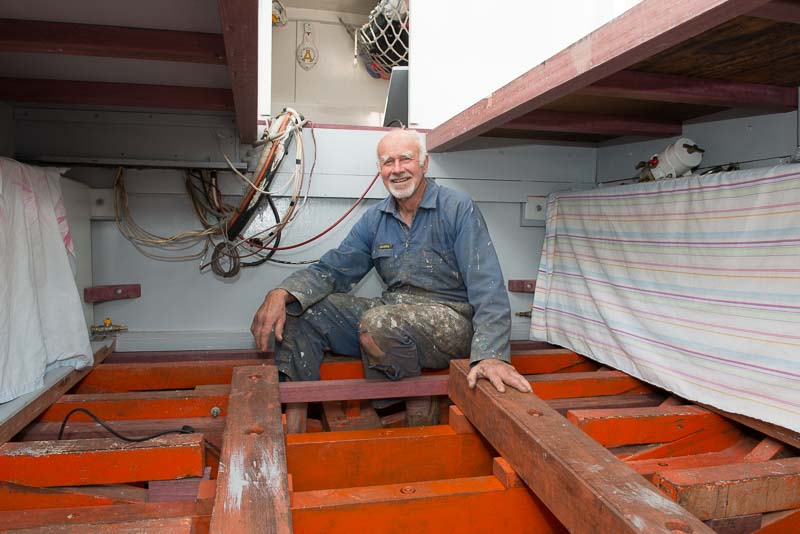 We bought a Dong-I box from Shaw Diesels to replace the old Hurth. It's a 1.63:1 vs the Hurth's 1.97:1, the lower reduction has let us stay with the same prop, a 24x16". We are getting to 1400rpm, very close to  the maximum 1500rpm the gardner operates at, so it's a good match. Extensive sea trials over christmas new year have bought big grins, the gardner's a honey. 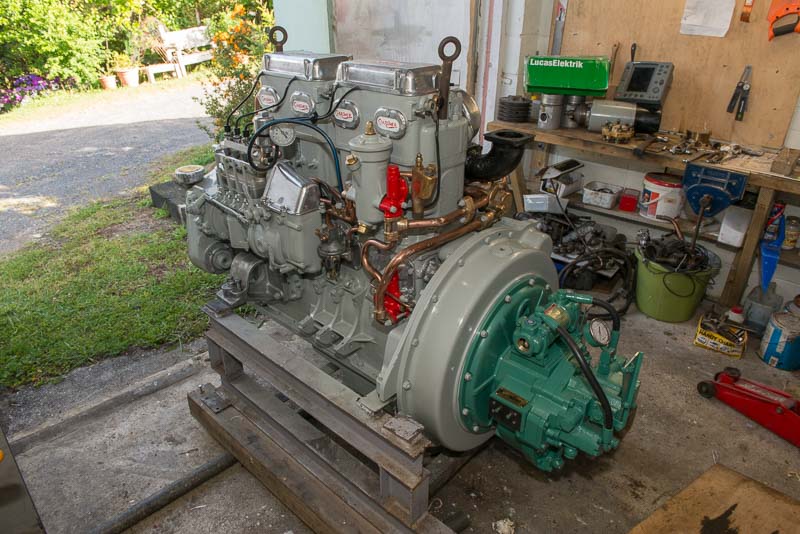 Read the log entry on restoring the Gardner here

Here's more photos on the project in galleries: